Guest Author Tsvi Bisk Asks “What if one billion dollars a year were used to buy Israeli alternative energy technology?”

I asked Tsvi Bisk to share his thoughts on Jewish philanthropic giving, particularly as it related to Israel and the American Jewish community.

Mr. Bisk is the director of the Center for Strategic Futurist Thinking and the author of a new book, The Optimistic Jew: A Positive Vision for the Jewish People in the 21st Century.

I am honored by his contribution and hope you find the concept of multi-dimensional giving to leverage economic and social benefits as fascinating as I do.

Jewish Giving in the Twenty-First Century by Tsvi Bisk

As others in this debate have indicated, we must replace the either/or decision making of how to divide the Jewish philanthropic dollar with “national/universal projects” that have both Jewish and universal impact inherent in them. Let’s replace the concept of the philanthropic Chinese menu- 20% of giving to column ‘A’ (Jewish causes) and 80% of giving to column ‘B’ (non-Jewish causes)- with projects which are by nature 100% Jewish and 100% universal.

In my recent book The Optimistic Jew: a Positive Vision for the Jewish People in the 21st Century (Maxanna Press, 2007) I expand on this concept, devoting an entire chapter to “The Jewish Energy Project” in which I identify petrodollars as a “Jewish Problem” (financing anti-Semitism, terrorism and nuclear weapons). I suggest Jews formulate a coherent energy policy aimed at creating political alliances and economic instruments to help downgrade oil as the dominant international commodity.

In a separate article for a non-Jewish publication entitled “The Energy Project” (The Futurist, January- February 2007) I wrote: “For the sake of our shared environment and international security, the time has come for the West to formulate a coherent energy policy dedicated to downgrading oil as the dominant international commodity.”

It is clear to me that there is a real correlation between “narrow” Jewish interests and universal interests regarding the energy issue. In addition, the issue itself is multi-faceted- environment, economy, alternative energy, security etc.

How Would It Work?

The giver (or local Jewish community) would buy Israel alternative energy technology and donate it to a local hospital. This would have the following multiple effects:

1. Israel gets more immediate economic benefit than if the money were just donated to a public bureaucracy. Research shows that a dollar spent in the private sector has one and a half to twice the positive economic impact (jobs created and economic activity stimulated) than a dollar spent in the public sector. In other words $10,000 dollars spent on Israeli technology would have the same or more economic impact as $15,000 donated to an Israeli charity.

2. Israeli gets more long term economic benefit by establishing itself as a major world player in the alternative energy market, just as it is in the world water technology market.

4. The local community benefits- energy costs of the hospital decrease, enabling it to expand services in other areas.

5. You create a paradigm around which you can form coalitions with many non-Jewish groups to address an issue that is both an existential threat to the Jewish people and a grand-strategic threat to the West- i.e. the power of petroleum.

6. Such a project might appeal to non-involved young Jewish people and stimulate them to get involved with a Jewish project, thus it becomes another tool to fight assimilation and growing alienation from Israel.

The concept of “national-universal projects” addressed within Jewish frameworks has been anticipated by people like Ruth Messinger, who founded The American Jewish World Service (as well as other organizations).

Following a talk I gave this past summer in Minneapolis, attendees organized The Minnesota Jewish Energy Project (MJEP) dedicated to implementing the above concept in their local community. (If you are interested in creating a similar organization in your state or community I suggest you contact Brian H. Davis, the founder of MJEP at: brian@minnesotajewishenergyproject.org).

Israel’s GDP this year (2007) will be over $150 billion. Assuming that all Diaspora contributions and Israel Bonds total about $1.5 billion dollars, this would be equivalent to only 1% of Israel’s GDP.

The economic, social, environmental, political and Jewish potential of “multi-purpose,” “multi-dimensional” giving within the framework of national-universal projects boggle the mind.

Let’s discard the Chinese menu method of giving and adopt the above integrated approach. 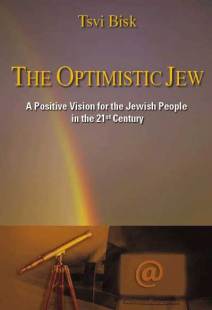 The Optimistic Jew: a Positive Vision for the Jewish People in the 21st Century is available from Amazon and Barnes & Noble.

Mr. Bisk is also the author of Futurizing the Jews: Alternative Futures for Meaningful Jewish Existence in the 21st Century (Praeger Press, 2003).

You can reach him at bisk@futurist-thinking.co.il.

This entry was posted on Tuesday, October 30th, 2007 at 11:42 am and is filed under Guest Author, Jewish Philanthropy, Profile: Social Entrepreneur. You can follow any responses to this entry through the RSS 2.0 feed. You can leave a response, or trackback from your own site.

16 Responses to Guest Author Tsvi Bisk Asks “What if one billion dollars a year were used to buy Israeli alternative energy technology?”